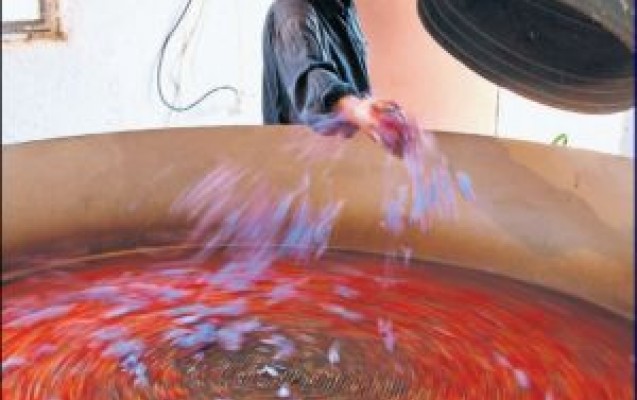 Kozani Crocus is one of the rarest Greek products of Protected Designation of Origin (PDO) that is cultivated only in the Kozani crocus villages.

It is one of the most expensive spices in the world and the most valuable – literally – aromatic material on earth. It costs approximately €3.50 per gram. Why so expensive? Because to produce one kilo of saffron (the dried stigmas of the Kozani crocus that are used both for cooking and in medicine as you will read below) 150,000 of the golden stigmas of the flower are needed. For 300 years the “treasure of the Greek earth”, as it is called because of its colour and price, has been cultivated in Kozani, in a unique area that contains 35 villages. Krokos, Karyditsa, Ano and Kato Komi, Petrana, Ayia Paraskevi, Lefkovryssi and Lefkopigi, are some of the Kozani crocus villages that have a population of approximately 1,300 families who hold the saffron production of Europe in their hands. The secrets of cultivating, harvesting and drying have been handed down from father to son and are kept as part of their traditions.

What we know with certainty is that harvesting begins sometime in October. The whole process is done by hand and ends early in November. The drying stage follows and takes from 20 days to 2 months.

Although it is a product of protected designation of origin, it is not particularly widely-used as a spice in Greek cooking. Lately there have been inspired efforts by chefs of the new Greek cuisine to teach us how to use this precious spice in our cooking. Its aroma and colour are two of the basic reasons (besides medicinal) you should put some saffron in your rice, fish, chicken or dough. But be careful! When we say a little bit, we mean a little bit! Not the “little” as in “a little bit of pepper” or salt. In the case of saffron, you need the precision of a chemist weighing out his materials, especially if you are using it for the first time. If the recipe says 6-7 threads – believe me – that is exactly how many you should use. Otherwise, instead of your food having a slight saffron aroma, it will be so bitter you will have to cook up another batch. When you get to know it and develop your own taste for it, you can increase or decrease the quantity according to your preferences.
In order to get the beautiful yellow colour that saffron gives food, you should not add it to dishes that have ingredients with strong colours such as tomato or spinach.
You can add saffron either during cooking, when done, or when serving. If you are going to add it to a dough, you should first soak it for a few hours in water or milk.

Kozani crocus as a medicine

The Crocus sativus is a top-notch medicinal plant with exceptional qualities. This statement is not based on Hippocrates or Dioscurides for whom it was a basic therapeutic substance. It is based on continuous scientific studies (most of which testify to the fact that there is something interesting in saffron) whose results to date indicate that crocuses act as a(n):

Did you know that…
...there is a proposal that the University of Western Macedonia have the crocus as its emblem as it had devotees (as images on ancient vases testify) as far back as prehistoric times in Greece? And during the Byzantine period was called “the blossom of prudence”? Also the fact that the name is Greek (in mythology Crocus was a friend of Hermes who was wounded while they were playing; crocuses were named after him when three drops of his blood fell on a flower and formed the stigmas) make the crocus an ideal emblem for this University.

The facts cited are to be found in the Kozani Crocus Meeting document entitled “Treasure of the Greek earth”. The meeting was held at the Grande Bretagne Hotel on Saturday, 11 March 2006, organised by the Western Macedonia Region authorities.