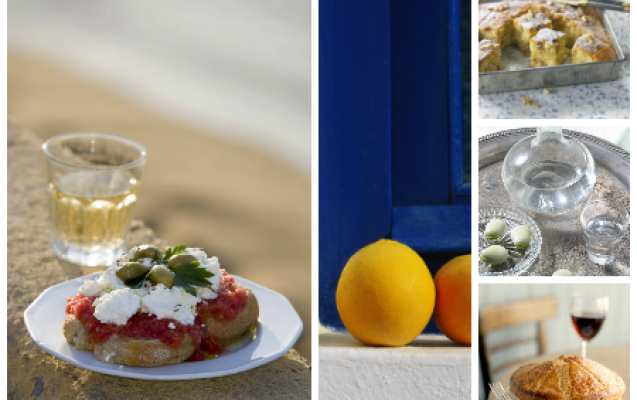 Bread, wine, olive oil. Travelling through the local flavours of Greece, one comes across many differences in ingredients, techniques and in perception. But there is a threesome that, like a thread, links the four points of the Greek horizon and its earliest history with today: bread, wine and olive oil. Wheat, grape vines and olives trees: three elements that are inextricably tied to the lands washed by the Mediterranean. Three elements that served as foundations for the lives of the Greeks before they laid the foundations for the Parthenon. Three sacred ingredients that have for centuries now been the centre, not only of the country’s traditional cuisine, but also of its religious traditions, both early Christian and Christian. Three symbols of peace, hospitality and good living that the cuisine of the Greeks has used for centuries.

A crossroads of flavour and cultures. Dozens of interesting gastronomic ideas have been laid on the foundations of the basic threesome (bread, wine, olive oil) of Greek cuisine. Recipes, ingredients and methods of cooking that sometimes came from the East, having ploughed the waves of the Aegean Sea, and sometimes from the West, travelling on the Ionian Sea. In other words, both the rich, palatial, if you will, cuisine from the shores of Turkey and the simple, earthy cuisine of the Italians have left indelible marks on traditional Greek cuisine as both these countries were dominant powers in Greece for many years. All those who have passed through Greece have done the same, to a greater or lesser extent, whether these were refugees from Asia Minor, Turks who found themselves in Thrace after the population exchanges, or repatriated Greeks who came and brought with them traditions from their second homes.

Perusing the gastronomic map of Greece, one can see that the Ionian has clear Venetian influences in its cuisine; rich flavours dictated by the climate and the close relations with the Bosporus and European Turkey characterise the cuisine of northern Greece; Aegean cuisine is sometimes as simple as the landscape of the Cycladic islands with unadorned marine or earthy flavours, and sometimes exhibits influences from Smyrna especially on Lesvos with its olive tree orchards and Chios, the land of mastic. These are islands from which one can see the Turkish shores and constituted the first stop of the Asia Minor refugees after the Smyrna disaster. Some stayed there, others took the boat on to Piraeus, but all of them left something of their culture and cuisine. Central Greece with its pies and meats, on the other hand, kept its local cuisine “purer”, as social and political developments along the frontiers were a mere echo there. Going south to Crete, one comes across a cuisine that is so rich in local ingredients and gastronomic ideas that it needs a website devoted to it exclusively.

If we were not convinced that Greece has produced small miracles of gastronomic wisdom, we would not be inviting you on a journey to its traditional cuisine. We would not drag you to its inaccessible mountain villages, invite you to its lonely fishing villages, sail with you to its tempest tossed islands, we would not go to its rainy cities in the north, and we would not hand on to you the secrets of its refuges in the south. We are not urging you to take a futile gastronomic trip to Greece (although there are no futile journeys) and we would not be giving you the idea of trying out all the local recipes you will find here if the whole crowd at ICookGreek had not savoured them first.