A list of traditional products from all over Greece (part I) 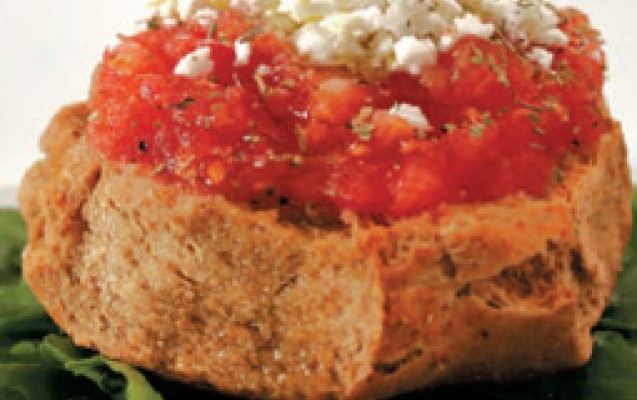 A fluid, tart product made with sheep's, goat's or cow's milk, depending on the time of year when it is made. Boiled immediately after milking and, 2-3 days later, after it sets naturally, is salted and mixed until smooth.

Small pieces of pork, cooked with spices, onion and salt, and stored in fat in eartherware containers. It keeps for about a year.

A type of local fish (which looks like an eel), famous not only for its tasty flesh, but also for its eggs. Often cooked with garlic and oregano.

A very salty mezze made from fish fillet. The fillets are "cooked" in salt and oil, in which they remain for several days.

Thin slices of meat, to which salt, pepper, other spices and garlic are added, and left to dry in the sun.

A tart product of sheep's milk, served as a refreshing drink.

With its distinctive smell, it's a main ingredient in famous Attica honey.

Virgin olive oil with a rich aroma, famous for its yellow colour.

White, round cheese with a smooth texture, made exclusively from locally sourced milk.

A yellow cheese, cylindrical in shape, stored in olve oil, hence its name. Tastes a little like kefalotyri. Other local variations of this cheese can be found in Samos and Corfu.

Ouzo, the national drink of Greece, is a strong, white alcoholic spirit, which turns nearly opaque when water is added to it. The star anise gives a distinctive flavour to Mytilene ouzo, especially from the Plomari area.

A favorful small fish, eaten raw as mezze with ouzo, picked in salt and olive oil.

This pork slices which, once salted, are smoked in the fire. Common in Aetolia-Acarnania (in western mainland Greece).

A kind of white cheese, made from sheep's or goat's milk, or a mixture of both, with a slighlty tart flavour. Common in Grevena and Kozani (in northern Greece).

The most expensive spice in the world, with the most precious aromatic flavour. It sells for ~3.50 euros per gram. In Greece, it is made excluseively in the "saffron villages" of Kozani.

Greek chilli peppers. Small, red, hot peppers, from which red pepper used to be made in the past. They also come in a larger, sweet variety.

A white, runny cheese, made from a mixture of cow's, goat's and sheep's milk. Historically, it originates from the wider Balkan area. It could be called the feta of Northern Greece.

an off-white, creamy cheese with a tart and salty flavour. Made from sheep's or goat's milk in parts of Thrace and Thessaly. It is one of the oldest cheeses on the market, the origins of which are lost to history.

A yellow, cylindrical mature cheese, with a strong smoky flavour and aroma. Made exclusively in Metsovo, using cow's and goat's milk. A very distinctive and special mezze, popular served in a cheese board with other cheese varieties.

Graviera from Agrafa (in mainland Greece).

A cheese from sheep's and goat's milk, with a dark brownish rind, and a light yellow-off white interior with holes. Usually accompanying main dishes, but can also be used grated on pasta.

A light yellow cheese with a sweet flavour, made mainly from cow's milk, or sometimes from a mixture of goa's and sheep's milk. It is the second most popular cheese in Greece, behind feta. almost 45% of kaseri yearly is produced in Thessaly.

A delightful variety of local mushrooms, with a distinctive earthy flavour and aromas, which taste nothing like mass produced varieties. Equally delicious cooked, grilled, or fried.

A whiite, fresh cheese without salt, made from rich goat's and sheep's milk, or from cow's milk. One of the traditional cheeses of the Balkan region, myzithra can also be found in mature variety, to which salt has been added - this variety can be used grated over pasta. Also called "manouri" in Macedonia or "anthotyros" in Crete.

Fresh, white cheese with a rich milk aroma. Made from goat's milk and served as an appetizer or in recipes.

Fruit resembling a small orange, with a very distinctive aroma and a mildly bitter flavour, characterstic of the Ionian islands.

A yellow cheese with many holes, stored in brine for a long time. A typical cheese from Macedonia.

Top quality medium to large peaches, with a sweet and juicy flesh and a bright orange-red colour.

The Cretan version of "myzithra", in fresh and mature variations. Very high in fat (up to 65%).

A yellow cheese made with sheep's milk, with a brown rind. Cretans have been making graviera since the times of Venetian rule. Also famous for their Graviera are Naxos and Agrafa, while each variety has a different flavour.

Authentic honey without additives, carrying the richness of plant and flower aromas of Crete.

A light coloured, almost white cheese with a tart flavour and plesant smell. Made from goat's and sheep's milk.

A small, sweet raisin, made from rozaki and sultana grape varieties. The most famous varietiesceom from Corinth and Crete.

A soft white cheese, made from goat's milk. Made using so-called touloumia (puches made from animal skins), and stored inside milk. Every time a piece is removed, the container must be topped up with milk, to preserve the rest of the cheese.

White or nearly white cheese, with a tart flavour, without holes. In order to make this type of tart myzithra, milk serum must be used, usually from sheep or goat. Cretans serve it with meals, but also as a filling in pies.