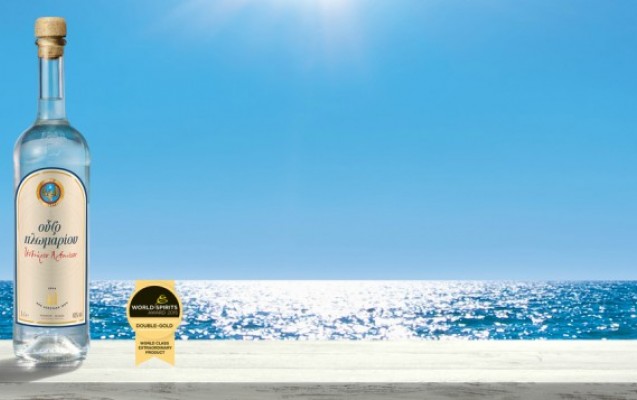 The fine quality, reliability, and authentic taste of Ouzo of Plomari Isidoros Arvanitis were rewarded at the renowned World Spirits Awards 2015. The contest has been taking place over the last 13 years and annual participants exceed 400. In fact, participants include some of the most acclaimed distillates worldwide.

In the contest that took place in 2015, Ouzo of Plomari Isidoros Arvanitis won the highest distinction, the Double-Gold Medal, an award given to products that distinguish themselves for their exceptional quality.

The award was no accident. Ouzo of Plomari Isidoros Arvanitis has been produced since 1894 in Plomari, Lesvos, the home of ouzo. Its main ingredient is anise that is grown in fields owned by the distillery in Lisvori, which grows the best anise in the world! Ouzo Plomari also uses crystal clear water from the spings of the Sedountas river that gives the ouzo a special character and other selected fine ingredients from all over Greece such as fennel from Euboia, mastic oil from Chios, and salt from the salt marshes of Kalloni, Lesvos.

However, an ouzo can not be truly great without a special recipe. Ouzo Plomari has been loyally following the secret recipe of Isidoros Arvanitis since 1894.

The distillation is carried out traditionally, in small handmade copper stills, as it was back then. In fact, the stills are handcrafted by the same family of coppersmiths today.

The bottling, packaging, and storing of Ouzo Plomari are carried out with the latest equipment and the greatest possible degree of automation. Hence, quality and absolute safety are ensured for every consumer.
The distillery would never be able to attain its goals if it were not for its people. All the employees of the distillery are emotionally attached to their job. Besides, most of them were raised in Plomari and ouzo is an integral part of their memories and traditions. As a result, they produce ouzo with love and artistry.

Today, Ouzo of Plomari Isidoros Arvanitis has won first place in the hearts of Greeks, while being exported to 37 countries worldwide.