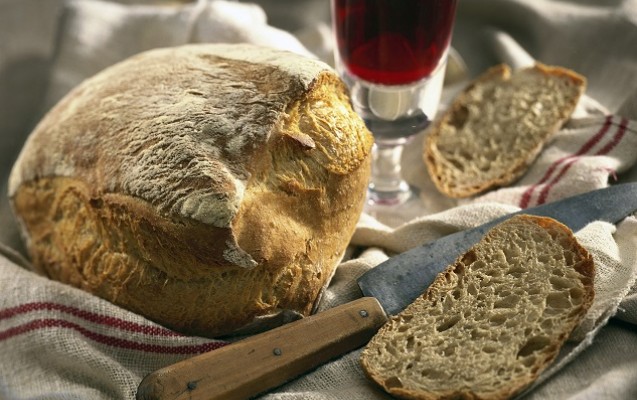 Unique local products, many of them fresh, seasonal ingredients, a wise simplicity in combinations and a philosophy of sharing are the four things you need to remember if you want to look at food through Greek eyes.

Virgin olive oil. The precious juice of the olive can be found in every Greek dish, even the ‘poorest’. It is gastronomic gold that goes beautifully with the fresh vegetables and herbs of Greece, such as tomatoes, onions, oregano, parsley, and with the Mediterranean’s exceptional seafood. Greek cuisine has a whole group of traditional dishes that are exclusively based on virgin olive oil combined with onion, tomatoes and some other vegetables, such as okra, fresh green beans or peas: these are called ladera.

Greens. The wild greens of Greece, eaten as an accompaniment or a main dish during religious fasting, have had a substantial role in the cooking of the agrarian population. They are consumed either plain, lightly cooked with olive oil and lemon juice, or as a filler for the renowned pies of Greece, a great chapter in the popular local gastronomy of the country. The most common greens in Greece are radicchio, charlock mustard, purslane, bur chervil, sowthistle and dandelion. Rocket, with its strong flavour, has always been used with moderation to add taste to a salad or a filling, especially in periods of religious fasting when daily nutrition was based on greens and herbs. Spinach is a favourite in Greece where it is rarely eaten plain; it is usually used in a spanakopita (spinach pie) or in spanakorizo (spinach and rice). Over the last few years, many salads in Greece use spinach as a basic green.

Tomatoes. A favourite in Greek cuisine, as it goes superbly with olive oil and onion to make the renowned kokkinista (dishes cooked in tomato sauce) which have raised generations of Greeks. An equally beloved dish is summertime tomatoes stuffed either with just rice or with mince meat and rice. Both kinds are a delight when accompanied by feta and homemade bread. Tomatoes are also consumed raw in the classic horiatiki salad, or are fried with eggs in olive oil for kayiana.

Garlic. A strongly-scented bulb with a strong personality, garlic is a basic flavouring agent in traditional Greek dishes. It is not used only in red sauces, but also in cooked meats, such as pork, lamb or goat, in the oven and when cooked in a pot. It is, after all, the basic ingredient in the traditional skordalia, a creamy dip that frequently accompanies fried cod.

Onion. Greece’s favourite bulb, both when it is used raw and “hot” and when it becomes sweet having been sautéed in virgin olive oil and simmered in a red or lemony sauce. In traditional Greek cuisine there is a clear and inviolable law: nothing gets cooked in a pot without onion. Traditional stifado, usually made with game such as rabbit or hare and even sometimes with chicken, is made with plenty of small baby onions.
Parsley. An aromatic herb used widely to lend its scent to salads, sauces, and even grilled fish or vegetables that are served with an oil and lemon dressing.

Oregano. The grand dame of dried herbs, it loves feta and olive oil. When used in cooked dishes, it’s aroma is so strong that these are called riganata (the oregano dishes).

Lemon. A basic ingredient in avgolemono, a classic Greek sauce used in traditional soups such as mageiritsa, chicken soup or meat soups and in many other dishes known as fricassee. Pork with leeks and celeriac, or lamb with lettuce, spinach, spring onions and dill, are two of the favourite fricassees in Greece. Dolmas, either made with vine leaves or cabbage leaves, are frequently accompanied by avgolemono.

Wine. For Greece, wine is a whole chapter in its culture. It would be impossible not to find it in the country’s cuisine. Mainly pork and poultry are cooked with wine and make up a category of dishes called krasata (with wine) that can be served as mezethes (appetisers) or main dishes. Wine and vinegar are frequently used in marinades, a mixture of an acidic ingredient with olive oil and spices, in which meats, poultry and game are marinated to tenderise them and give them aroma.