Our BlogTurkey vs Pork - what are you having for Christmas?

Turkey vs Pork - what are you having for Christmas? 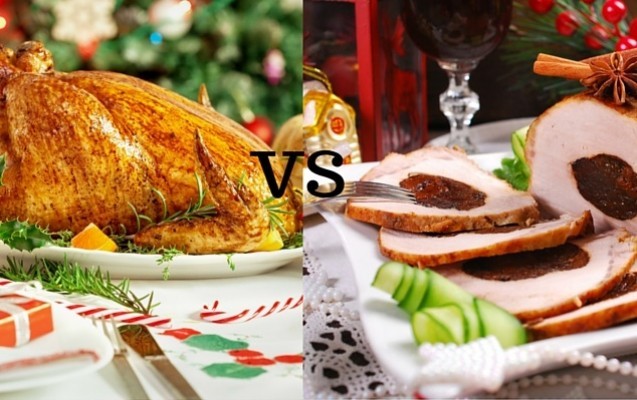 What are you having for your Christmas meal? Traditional pork or North American turkey, especially delicious when stuffed?

Traditional pork: Pork is traditionally served at Christmas in may parts of Greece. The slaughtering of the pigs, kept for a long time for this purpose, was a true ritual in many homes. The slaughtering did not occur at the same time in every area. In some parts it took place 5-6 days before Christmas, while in others it took place on Christmas day and went on after that, depending on who was visiting. The manufacture of sausages was linked to this ritual, while pork fat was stored in jars and used later in cooking. Well-known traditional Christmas pork dishes are pork with leeks and celery, or pork roasted in the fireplace. Other variations include fried pork and jellied pork, served, of course, with good local wine.

Victorian turkey: Christmas turkey dates back to the Victorian era, as do many anglosaxon Christmas traditons. While beef or duck were Christmas staples for many years, the upper classed added turkey to the menu during the 19th century. Big enough to serve an entire family, turkey was taken up by the middle classes during the 20th century.

Turkey and pork both:

- Are high in protein

- Are good sources of iron, zinc, potassium, phosphorus, selenium, vitamin B6, and niacin

- Are rich in sodium

- Have a low glycemic index, and can help keep insulin levels stable

- Are rich in the amino acid tryptophan, which plays an important role in the immune system, and affects appetite, sleep, libido, body temperature, and overall mood for communication. When serotonin levels are high, people feel calm and level-headed, while when serotonin levels are low, people are more prone to depression and aggression

- Turkey (without the skin) is lower in fat

- Turkey is lower in calories and contains less fat than pork. however, several parts of pork, such as pork tenderloin, are very low in fat, too. Comparing the two, we'll notice that they contain roughly the same levels of fat and calories. Turkey is made up of 70% white meat and 30% dark meat.

- Pork is higher in saturated fat and "bad" cholesterol, which can lead to arterial obstruction and heart disease.

- Pork is cheaper than turkey

Of course, there are no winners and losers in this debate. The important thing is to have a great atmosphere and enjoy!